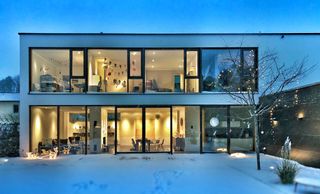 The future of housing is here, and it’s green, sustainable, and affordable

What are the evident characteristics that are recognized in this type of housing:

Increased access to energy in developing countries, the boom in sales of electronic products for the home and the growing number of sustainable buildings are clear signs of progress. But it is also clear the increase in energy demand of buildings and the construction industry, representing 36% of global energy consumption, without forgetting that they account for 40% of total direct and indirect CO2 emissions.

Not only that, but in developed markets like the EU, almost 75% of buildings are inefficient in energy, which motivates authorities and citizens to view favorably initiatives that reduce greenhouse gas emissions in the Construction Industry.

Green buildings are established as one of those initiatives that seems to be gaining ground among developers and consumers. And its environmental and financial benefits have been demonstrated with certainty in a series of successful green projects.

The benefits of eco-homes can’t be ignored

Sustainable buildings are built to reduce the carbon footprint of the construction industry. Ideally, they produce their own energy through solar panels, wind turbines or geothermal sources, they also have a strong insulation that guarantees a constant interior temperature throughout the year. And instead of concrete, green buildings are built with more sustainable materials. Some houses can collect rain and reuse it to wash clothes or for the water cistern. And with the wide variety of intelligent heating and cooling devices for the home available, engineers can make buildings even more energy efficient, which can reduce energy bills by an average of 30%.

Eco-buildings are designed to reduce the carbon footprint of the construction industry.

And building those buildings does not have a high cost. Many of the materials may be available locally, which saves time and reduces transportation costs. Allowing, in addition, that construction be faster, reducing labor costs. But more importantly, the owners will benefit from better air quality and better health, a constant temperature in the home and less maintenance, and will contribute an important role in the global effort to protect the environment.

The market for eco-friendly homes is growing

The increasing increase in the trend in sustainability is causing the size of the green building market to increase as well. For example, the global market for green building materials will reach 364.6 billion dollars by 2022. In addition, analysts at the research firm Market Research Future argue that the demand for green buildings will be driven by the change in the lifestyle of consumers, as well as the growing demand for high quality products and renewable energy.

The market research firm Grand View Research predicts that the global market for green building materials will reach $364.6 billion by 2022.

In fact, the results of a survey show that most consumers "prefer to buy products from those companies that respect the environment." This attitude is also growing among the European and American millennials, who are now the main buyers of housing and are already changing the dynamics of the market. The real estate expert Amanda Stinton has explained on several occasions that millennials value sustainability and take into account for the purchase that the environment is healthier, requires less maintenance and has smart technology; They do not want waste or leaks, since this generation interacts with their homes differently. In addition, the 37 leading European banks consider that energy efficient buildings are valuable and offer their owners more favorable mortgage rates.

A holistic approach to sustainability in high-rises

The latest construction project in Utrecht, The Netherlands, shows us how this country is at the forefront when it comes to ecological construction. The new apartment complex, called Mark, will consist of 1,000 units in three towers. The building will have greenhouses that will provide food for both residents and their restaurant that is contemplated for the roof. In addition, the community gardens on each floor will allow residents to manage their own smaller greenhouses, interacting in this way with neighbors. To also be carbon neutral, developers will place solar panels in nearby parking lots to produce enough energy to power the building. Meanwhile, residents will be offered a service to share electric cars, and the garage will be large enough for a total of 3,500 bicycles. The best part is that this housing project, which will be completed in 2023, will be affordable for most people. Some apartments will be sold at the market rate, but most will be low-income social housing and nursing homes. 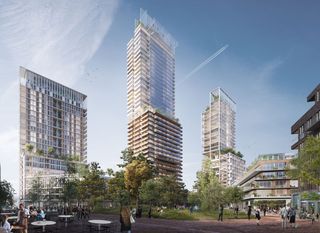 Green residential buildings are being built in many countries. In the United States, New Land Enterprises plans to make Milwaukee the home of the tallest wooden building in the Western Hemisphere. The tower is called Ascent, and its 21 floors with 201 apartments are made of solid wood, a strong material consisting of multiple layers of laminated wood. With this material not only gets to be more respectful with the environment than if you use steel or concrete, but it is also lighter, which means that the foundations of the building can be smaller. And thanks to the use of prefabricated components, this will allow a faster construction, producing much less waste. In fact, the architects behind this project estimate that 16 floors can be built in just four months. The project was recently approved by the Milwaukee Common Council, and once New Land Enterprises complies with the requirements of the City's Department of Neighborhood Services, the construction of Ascent will begin, which could be opened after 2021. 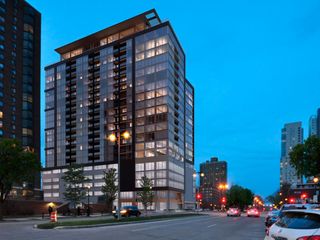 The use of wood in construction is increasingly common for the construction of ecological office buildings. One of the most recent examples is the 25 King tower that opened at the end of 2018 in the city of Brisbane, Australia. The architectural firm Bates Smart designed this building with 10 floors high and 45 meters high and is made of laminated wood (glued laminated wood) and CLT (cross laminated wood). They decided on the use of wood and prefabricated components in the construction because it offered them, not only a lower carbon footprint, but also a unique aesthetic appeal. The director of Bates Smart, Philip Vivian, says they were aware that people want to connect with nature, and the use of wood on the exterior and interior of buildings helps to complete the connection, making people feel more comfortable inside the building. In addition, the use of wood in construction saved them 46% energy and 29% clean water compared to a traditional concrete building. And to ensure a long-term positive environmental impact, 25 King is packed with features such as rainwater harvesting, optimized air conditioning and energy-efficient lighting.

The future we face – as seen by architects

The future we’re heading to is uncertain and filled with social and environmental challenges. This fact prompted the architecture and design magazine Dezeen to launch a competition called Dezeen x MINI Living Future Urban Home Competition, asking readers to design a home that would solve some of the challenges cities might face in the next 100 years. Architects came up with a number of creative solutions, and the concept of Cocoon BioFloss came third in the competition.

It was designed by the British architect Maria Vergopoulou, who believes that we will face a shortage of resources and a dramatic economic and political uncertainty in the future. Instead of bricks and concrete, she believes that the houses of the future will be made with reconverted or biodegradable materials, such as bioplastic fibers. The design is called Cocoon BioFloss, and the bioplastic would be made from agricultural products derived from organic matter such as apples and sunflowers. This material would be placed on layers of wire and would create a weatherproof cover. According to the architect, it would give way to a new DIY movement and would be easily accessible and affordable. Vergopoulou hopes that her idea will inspire the construction industry to be more creative, because, for decades we have overproduced and consumed in terrifying quantities.

The first prize in Dezeen’s competition, however, was claimed by the flood-resistant Georgian-style house designed by The D*Haus Company. Its proposal depicts a future in which rising sea levels cause massive flooding of coastal cities. Traditional homes would be replaced by timber houses that are made from prefabricated plywood elements and are elevated from the water with the help of 3D-printed concrete platforms. The use of wood would allow faster and more sustainable construction compared to using bricks. A large timber staircase would be placed in each home, while instead of a roof, the third floor would serve as a garden or terrace, allowing residents to spend some time outside. The architects’ vision was to create a house design that would merge the historical appeal of old Georgian houses with the necessities of modern and future living.

The pressing need to reimagine the way we live

Although it seems that the future estimates made by architects are extremely bleak, it could become a reality unless we solve climate change and resource scarcity. Changing the way we build and manage buildings is an important step in that direction. Building buildings with low carbon footprint, such as houses and ecological towers that replace cement with wood, with solar panels that feed buildings is a good step, but it is not enough. Green projects in countries such as Australia, the Netherlands and the United States are creating blueprints for others to follow and implement. The way we live is reinvented and these initiatives must be supported.

Even today, construction projects respectful of the environment are still subject to the vagaries of the real estate market, which is influenced by public policies, the economy, technological advances and various social dynamics. For example, an economic recession or an unfavorable fiscal policy could reduce the growth of the green building market. At the same time, millennials and new technologies could become the driving force for faster adoption of sustainable buildings. Despite these factors, green buildings are more than just a construction trend or business sector more oriented to profitability. They are a way to save the planet and build a better future. Only because of that important quality should they survive the short-term obstacles and transform the way we build and live.