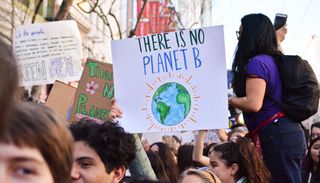 We have fewer and fewer opportunities to prevent global warming from rising beyond 2C, demonstrating the urgent need for faster deployment of climate-friendly and low carbon adaptation solutions.

Due to a rapidly warming climate and the inability to adequately reduce greenhouse gas emissions, there is an urgent need to focus more on resistance measures. A rapid and large-scale investment in effective solutions is needed to prevent global warming from reaching potentially catastrophic levels.

The fall in the prices of both renewable energy and natural gas has helped to reduce modestly emissions between heavy emitters such as Europe and the United States. However, none of the four biggest polluters in the world (China, the United States, the European Union and India) are currently making large global contributions to achieve the objectives of the Paris Agreement.

Expert scientists have given bad news, since global emissions of greenhouse gases increased approximately 2.7 percent in 2018. This has made it reach a record high, representing the second year of notable increases after a brief period of relatively stable emissions due to the slowdown in economic growth.

The latest IPCC report highlighted the severity of impacts we are already experiencing at 1C warming and stated that 2C of warming is now considered highly dangerous.

The countries have established a pact that consists of reporting their emissions every two years from 2024. It is something established in the new regulation of the Paris Agreement agreed at COP24 in December 2018 in Poland.

The biggest focus is being made on the emission of electricity, where the greatest progress is being made. But agriculture and transport are also contributing alarmingly and little attention is being paid to these sectors and other smaller emitters.

The European Union is struggling to boost emissions reduction, in large part because Germany is not moving away from coal. However, carbon dioxide emissions in the United States increased 3.4 percent in 2018, the largest increase in the last eight years.

China continues to make a large investment in renewable energy, electric vehicles and energy storage, although, despite that great effort, its total emissions will continue to rise until 2030. It is expected that India's emissions will begin to increase in 2033.

Air pollution from the consumption of fossil fuels is one of the most important global problems. And this is true, not only because of pollution, but because more than 3 billion people are breathing deadly smoke in their homes due to the use of stoves and polluting fuels. 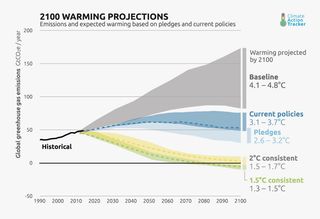 The impacts of warming in 1C are much more severe than anticipated. Floods, storms and droughts in Asia along with fires in the United States, Canada, Greece and Sweden are causing billions in expenses, not to mention human losses. While some climate adaptation and mitigation projects are complementary, they have to compete for limited government funds.

The impacts on urban environments around the world are currently estimated at $ 314 billion each year and are projected to increase to more than $ 415 billion per year by 2030.

As an example we just need to know that the wildfires in 2018 in California caused billions of dollars in direct damages and insurance payments.

The heat waves that hit Europe in 2018 significantly affected economic performance. Another impact was the reduction in the generation of energy from wind turbines, which highlighted the urgent need for greater investment in energy infrastructure resistant to climate and agriculture.

According to the new FAO estimates, economic losses in Asia due to drought were more than $48 billion in crops and livestock between 2005 and 2015.

A dangerously warm climate is leading us to hold renewed discussions among experts on the pros and cons of geoengineering interventions. Geoengineering in general is divided into two categories: the removal and storage of carbon from the atmosphere and the management of solar radiation, which is the reflection of solar rays in space or the blocking of a small part of sunlight before it reaches Earth. It is true that today there are many advocates of geoengineering solutions, but, because science is still largely based on theoretical models, it has been criticized for being potentially dangerous and for presenting politicians with the promise of a bullet of silver that can slow down attempts to reduce emissions.

The New Carbon Economy Consortium is an initiative of academic institutions, national laboratories and NGOs that seek to use emerging technologies to transform the economy using carbon in a positive way.

The United States and Norway are at the forefront of the carbon capture and storage (CCS) campaign; however, the European Commission, up to now, has been lukewarm about this technology.

Combinator is a technology incubator famous for participating in the launch of companies such as AirBnB and DropBox, and is now investing millions of dollars in financing geoengineering solutions.

Geoscientists, ecologists and urban planners are working to optimize the soil in such a way that they absorb greater amounts of carbon dioxide both in agriculture and in urban environments.

Emerging technologies, which receive funding, include phytoplankton designed by genetic engineering, direct capture of air, the brightness of marine clouds and electro-geochemistry.

Despite growing interest in geoengineering solutions, more and more experts warn about the potential dangers associated with technology, including unknown and potentially catastrophic side effects, high costs and the fragmentation of international efforts to reduce gas emissions.

Geoengineering is the new world of climate mitigation. It is true that clearly establishing the risks and effectiveness is still pending, what is already clear is that any climate solution with a silver bullet brings with it an additional "moral hazard" that can desensitize the general public to climate risk and exhaust their motivation to support decisive mitigation.

Victoria Campbell-Árvai, a Research Scientist at the University of Michigan’s School for Environment and Sustainability. 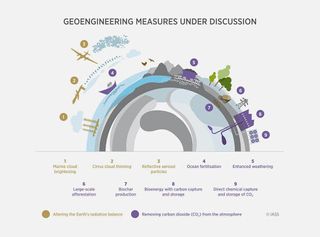 Despite the progress that is being made, these are insufficient, and we will see billions of dollars in additional damages and many more lives lost due to extreme weather events. Resilience, adaptation and responsibility with regard to infrastructure is ill-structured for increasingly extreme weather conditions and will become the center for both governments and businesses. Companies will accelerate the process to increase climate preparedness both in direct operations and in their supply chains. It is quite possible that geoengineering technologies will see more investment from the private sector and a renewed discussion at the policy level.

What This Means for Business

Companies need to increase the resilience of their supply chains and direct operations. For this, it will be necessary to make a greater investment in climate risk assessments and scenario planning.

The need for a more active role by companies in national and global efforts to implement the Paris Agreement and put more pressure on governments to limit global warming is evident. This means advocating for actions such as the price of carbon, the aggressive deployment of renewable energies and electric vehicles and climate-smart agriculture solutions.

The rapid reduction of greenhouse gas emissions and the increase in the capacity to recover infrastructure will only be possible with multisectoral collaboration. Companies must work with governments, NGOs and other necessary actors take advantage of the synergies needed to scale low carbon solutions in all industries.