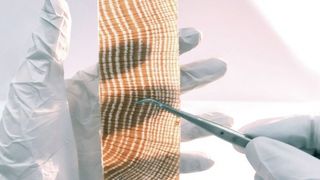 The reality is that construction and demolition projects generate tons of bulky and heavy debris, such as concrete, wood, asphalt, plaster, metal, brick, trees and stumps. The latest EPA analysis estimated that almost 550 million tons of debris were generated in the US in 2015, more than double the amount generated by municipal solid waste.

It is an evidence to say that ecological and sustainable construction methods and materials are a hot topic. For all the advantages they offer, as they not only reduce construction waste and greenhouse gas emissions, but also offer health and wellness benefits. Even if the owners do not have sufficient motivation for altruistic reasons, there are incentives and tax exemptions to boost their desire to be green.

Some of these new materials are created by experts and scientists whose goal is to reuse the materials. An example is the manufacture of transparent wood. Researchers at Stockholm’s KTH Royal Institute of Technology have developed a new transparent wood material that is suitable for mass production.

Experts explain that transparent wood is achieved by applying a process that consists of chemically removing the lignin from the wood, making it very white. After this, a transparent polymer is added to match the optical properties. Ultimately, it can be used to create windows and solar panels.

Researchers at the University of Maryland have also been conducting research to create transparent wood. They say that the material they have achieved has better insulating properties, is stronger than glass and more biodegradable than plastic.

Although it is true that many experts say that it may take a long time before transparent wood becomes a conventional building material, they believe it could be used for solar panel cells, to bring more light to buildings and for windows load.

Graphene Could Be a Game-Changer

Concrete is the most used material, being used in construction from the Romans. It is true that it is a common and versatile material, but it also generates 6% of global carbon emissions. Researchers are excited about the possibility of using graphene to create a new type of concrete that is much stronger, water resistant and greener. It is considered an excellent material for construction, since it is lightweight but stronger than steel or carbon fiber.

The main objective or obstacle to solve has been to escalate the production of graphene concrete. However, researchers at the University of Exeter have achieved a way to suspend graphene scales in water before mixing them with water and traditional concrete. This process will allow manufacturing to be easier.

The most important feature of graphene is its potential strength: an increase of 146% in compressive strength compared to normal concrete and a 79.5% increase in flexural strength. The factor that brings the most benefits is that it has a decrease of almost 400% in water permeability, according to the Exeter researchers.

What does that mean? Not only would the structures last longer, but their replacement would not be as often. As a result of the reduction in the use of concrete, carbon dioxide emissions would also be reduced.

Scientists and researchers are also studying how to add a new material to the bricks, generating a cooling effect on interior buildings. This material is called "hydroceramic", its cooling effect comes from the hydrogel inside the clay bricks that manages to absorb rainwater up to 500 times its weight.

During hot days, water is released to reduce the indoor temperature. This incorporation of innovation in the structure of a building has turned hydroceramics into a perfect material to revolutionize construction. These bricks someday will reduce your energy bill and make domestic air conditioners obsolete.

Another of the most interesting and innovative developments use cigarette butts in the manufacture of bricks. The fact that 1.2 million tons of cigarette butts are thrown each year, representing 5% of our global global waste, should make us think carefully about what we are doing. Thanks to this type of bricks, not only are these wastes reused, but we also avoid harmful chemicals that are released in the air and soil, such as arsenic, chromium, nickel and cadmium.

The Future of Smart Cement

The future also looks promising for cement, thanks to other developments by scientists of ways to remake this popular material into a more energy efficient building material.

In Mexico, a teacher has developed a cement with the ability to absorb and emit light energy, giving the concrete more functionality and versatility. It offers the possibility of being used to illuminate roads, bike paths and buildings without the use of electricity. The cement also absorbs solar energy, emitting it overnight for approximately 12 hours.

Developed by scientists in the Netherlands, self-healing cement uses bacteria to close cracks and is being tested in the United States and Australia. By using chemicals with characteristics similar to those found in human bones, infrastructures can "cure" themselves by resealing after a break, in the same way that human bones merge again after a fracture. Experts predict that this technology could be invaluable in earthquake-prone regions where a concrete crack tends to grow and often means that the entire structure is unstable.