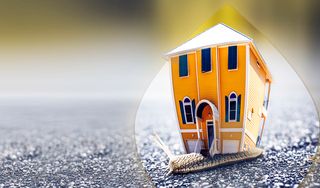 To find out what may happen to this crisis due to the pandemic, we will focus on historical data from the late 1990s. These show us that often, following a financial crisis, a sharp rise in house prices follows. If real estate growth occurs similar to the 2000s, safe haven assets such as gold and potentially Bitcoin may follow.

A strong sell-off is expected in the housing market in the second half of 2020. Countries such as the United States, Japan, South Korea, Singapore and other markets, which had high growth until the pandemic, are struggling with the decreased demand.

Another issue is that high-population markets like Makati, the Philippines, whose home prices have soared in recent years, are expected to experience a drop-in value from 15% to 20% by the end of the year.

A research paper published by the University of Granada and the Federal Reserve Bank of Chicago said that in the late 1990s and until 2007, several countries experienced sharp increases in house prices.

These strong increases are established as the main causes of the last economic and financial crisis in the world. Since the dramatic growth in bank loans during this period was primarily responsible for these market dynamics.

Why is there a rise in the property market after a financial collapse?

Second, the market implements stimuli and there is greater government support to lead the economic recovery. These strategies generally lead to increasing real estate purchases over time.

Over the next six months, the Federal Reserve does not intend to curb stimulation of the economy.

Fed President, Jerome Powell, predicts that the unemployment rate in the US will reach 25%, a level never seen before since the Great Depression in the 1930s.

These pessimistic economic projections cause economists to put pressure on the United States government.

Nobel laureate, Joseph Stiglitz said earlier this week in an interview with Bloomberg that the lack of government support can be troubling, as people will say that if huge spending is made to save airlines, there won't be enough money. To shape the economy, we should move on.

The pressure imposed by economists and the population predicts that the Federal Reserve will be pushed to provide the economy with sufficient liquidity. This will result in high levels of bank lending, spurring the property market in 2021, preparing it for a strong decade ahead.

The well-documented correlation between gold and the housing market, and the growing perception of Bitcoin as a store of value among institutional investors, may indicate that housing, gold, and Bitcoin will perform well in the long term.