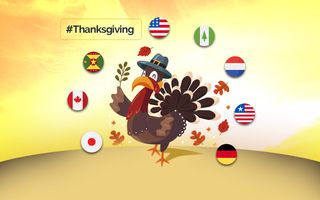 As you know, the United States is not the only nation with a holiday dedicated to Thanksgiving: here are eight places where the Thanksgiving tradition is celebrated in different ways around the world.

Although I can surprise you at the first Thanksgiving celebration in Canada, it was earlier than the one in the United States in more than 40 years. In 1578, an expedition led by the English navigator Martin Frobisher held a ceremony that began the Nunavut, giving thanks for the safety of his fleet. It is considered the first Thanksgiving celebration in North America, although, it is also true that First Nations (the indigenous peoples of Canada) and Native Americans already celebrated harvest festivals years before the arrival of Europeans. Loyalists who went to Canada during the Revolutionary War took with them the turkey tradition, along with some other customs of American Thanksgiving. In 1879 the Parliament of Canada established a formal date for the National Thanksgiving Day, on November 6; As of 1957, the date was changed to the second Monday in October. The customs that take place on Thanksgiving in Canada are very similar to those of the United States: eating turkey and watching football (the Canadian Football League celebrates an annual Thanksgiving Classic) with the family.

The similar holiday they perform in Thanksgiving Germany is Erntedankfest ("Thanksgiving Festival"). This religious holiday is usually held on the first Sunday in October, which also often coincides with the first Sunday after Michaelistag (Michaelmas) on September 29, although it usually varies from one place to another, establishing the celebration on several dates in September and October . The rural areas of Germany celebrate this harvest festival more literally, and the churches in the cities also join the celebration, thanking for the good luck their congregations experienced that year. During a typical Erntedank festival, those who participate can take an Erntekrone ("harvest crown") made of grains, fruits and flowers to the church, and deliver it in a solemn procession, to later delight in such abundant dishes as die Masthühnchen (fattened hens) or der Kapaun (castrated roosters).

This republic of West Africa may be the least likely place to hold an American-style Thanksgiving celebration, but only until you think about its history. The slaves who were freed from the United States established Liberia in the early 1820s with the help of the American Colonization Society, a private organization that advocated that sending African Americans to their home country would offer them better opportunities to establish themselves. that it would help spread Christianity in Africa and solve the inconvenience that had been caused by the problem of slavery in the United States. In the early 1880s, the Liberian government declared through a law that the first Thursday of November would be established as National Thanksgiving Day. Today it has become a holiday, and largely Christian: churches auction baskets full of local fruits, such as papayas and mangoes after their services, and local families feast on the reward. Instead of turkey and pumpkin, the Thanksgiving tables in Liberia feature spicy roast chicken and cassava puree, and celebrate with music and dancing as part of the Thanksgiving tradition.

The Japanese variation of Thanksgiving Day, Kinro Kansha no Hi (Labor Thanksgiving Day) came naturally from an evolution of an ancient rice harvest festival, Niinamesai, whose roots date back to the VII century AD during the Meiji Era (1868-1912). The official date to celebrate The festival was established in November 23 and has remained the same since then. The new Labor Thanksgiving tradition began in 1948, three years after World War II ended, to make a claim to the rights of workers in Japan. Currently the population observes it as a national holiday, but they do not create a great celebration as is done in the American holiday. However, labor organizations organize events in which citizens are encouraged to celebrate the principles of hard work and community participation. Another custom of this celebration in Japan is that children usually make thank-you cards for police, firefighters or other municipal workers.

This island is located in the Pacific Ocean, a former British penal colony and which is currently an Australian territory, may seem like a strange place for a Christmas celebration with American roots. It is true that his Thanksgiving tradition starts in the mid-1890s, when American merchant Isaac Robinson organized an American-style Thanksgiving service at the Church of All Saints in Kingston for some American whalers to visit the celebration. His plan worked, and the parishioners of the island, have continued with the celebration of the holiday until today, bringing fruits, vegetables and corn stalks to decorate the church, also sing American hymns on the last Wednesday of November of each year . 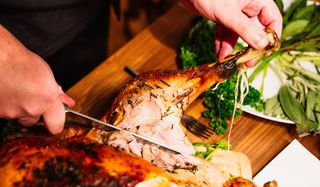 On October 25, people on this West Indies island celebrate their own Thanksgiving. With this party they celebrate the anniversary of a joint military invasion of Grenada by the Caribbean and the United States in 1983. This invasion restored order on the island after a coup d'etat overthrew and executed Maurice Bishop of Grenada, socialist leader, and managed to put the island under martial law. While they were on the island of the West Indies that fall, American soldiers explained to local citizens what the American holiday consisted of and some of its traditions. Many citizens decided to show their own gratitude by inviting the soldiers to dinner and celebrate with them, even surprising them with non-native island foods such as turkey, cranberry and potatoes. Today, in the Thanksgiving in Grenada, formal remembrance ceremonies are held in the cities, but in more rural areas it is not very marked.

Many times we do not remember that the English settlers who traveled to the New World in Mayflower, approximately 40 percent spent the years 1609 to 1620 living and working in the Dutch city of Leiden. Because of this, many have claimed that the Pilgrims' first Thanksgiving celebration is inspired by Leiden’s annual commemoration of the breaking of the Spanish siege in 1574. In any case, the people of Leiden continue to celebrate their ties with the Mayflower passengers today, celebrating with non-religious religious services on the fourth Thursday of November.

In the late nineteenth century Puerto Rico became a territory of the United States, and its inhabitants enthusiastically adopted many of the traditions of the party. They celebrate it on the same day (fourth Thursday of November) and have the same custom of making purchases on Black Friday the next day. But Puerto Ricans have made their own turn to the traditional Thanksgiving holiday: there is usually turkey, being able to be roasted, seasoned or a turkey stuffed with mofongo (a plate of mashed bananas), but they have also adapted it to pork Roasted as a common item on the menu, served with more bananas, rice and beans.